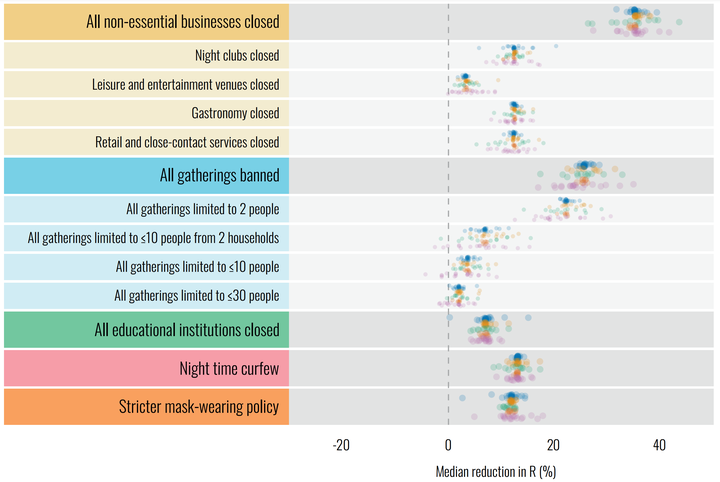 As European governments face resurging waves of COVID-19, non-pharmaceutical interventions (NPIs) continue to be the primary tool for infection control. However, updated estimates of their relative effectiveness have been absent for Europe’s second wave, largely due to a lack of collated data that considers the increased subnational variation and diversity of NPIs. We collect the largest dataset of NPI implementation dates in Europe, spanning 114 subnational areas in 7 countries, with a systematic categorisation of interventions tailored to the second wave. Using a hierarchical Bayesian transmission model, we estimate the effectiveness of 17 NPIs from local case and death data. We manually validate the data, address limitations in modelling from previous studies, and extensively test the robustness of our estimates. The combined effect of all NPIs was smaller relative to estimates from the first half of 2020, indicating the strong influence of safety measures and individual protective behaviours–such as distancing–that persisted after the first wave. Closing specific businesses was highly effective. Gathering restrictions were highly effective but only for the strictest limits. We find smaller effects for closing educational institutions compared to the first wave, suggesting that safer operation of schools was possible with a set of stringent safety measures including testing and tracing, preventing mixing, and smaller classes. These results underscore that effectiveness estimates from the early stage of an epidemic are measured relative to pre-pandemic behaviour. Updated estimates are required to inform policy in an ongoing pandemic.